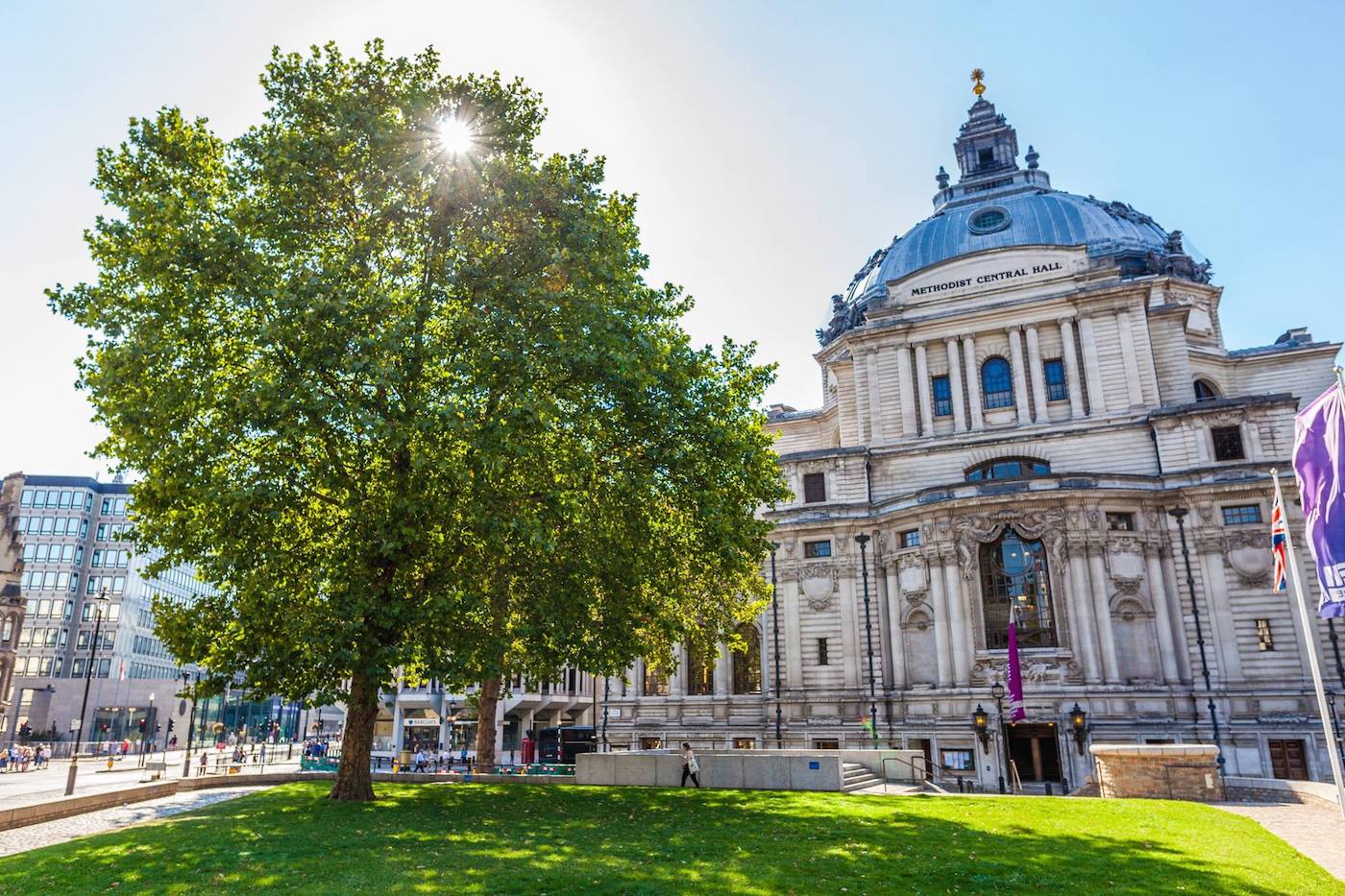 Why have you dropped ‘Methodist’ from your name?

What’s different about your building compared to a ‘normal’ church?

Our magnificent historic building was one of around 40 Central Halls built between the later 19th Century and up to the Second World War. They were originally an initiative of the Wesleyan Methodist Church to engage with the poor and burgeoning populations of the inner cities.  Central Halls were to be places of invitation and generally have less traditional Christian symbols than most churches.   When it was built, Methodist Central Hall Westminster was intended to serve not only as a Methodist church, but to be of ‘great service for conferences on religious, scientific, philanthropic and social questions.’

How do you choose which events are allowed in your building?

Like all Methodist Churches we use non-alcoholic wine for holy communion and do not permit alcohol to be served at any Church event (e.g. Church Christmas lunch).

However in 2005 the Methodist Conference (the supreme governance body of British Methodism) ruled that when the premises are used as a conference centre and with the trustees permission, alcohol can be served. It is on this basis that Central Hall Westminster Ltd (the not for profit company created and contracted by the trustees to hire out space in the building) applied for, and were granted, an alcohol licence.
Consequently, alcohol can be served at some functions taking place in some – but not all – parts of the building.

But don’t Methodists abstain from alcohol?

It is certainly the case that very many Methodists, particularly in the 19thcentury, were ‘tee-totallers’ – that is, they didn’t drink alcohol at all.
Lots of Methodists still are, and lots are not.

The Methodist Church in Great Britain has always highlighted the dangers of alcohol misuse and the damage it causes to personal well-being and social relationships. The judgement of the Methodist Church however, is that total abstinence is a matter for individual choice. It is not a condition of Methodist membership. Methodists are recommended to make a personal commitment either to total abstinence or to responsible drinking.
For more info click here.

Has the HM Queen or other members of the Royal Family visited?

Yes! Princess Elizabeth made her first visit to Methodist Central Hall Westminster with her mother and father, (King George VI and Queen Elizabeth) in 1932. Her Majesty the Queen has visited the building several times, most recently in 2005 to unveil our life sized statue of Rev John Wesley, the human founder of Methodism, and in November 2003 to sign the Covenant made between the Church of England and the Methodist Church of Great Britain.

Other members of the Royal family visit the building quite regularly, often to attend functions taking place here. In 2018 the Duke and Duchess of Sussex, the Princess Royal and Prince Michael of Kent all attended events in the building.

Who has spoken in the building?

Given its unique location, right in the heart of London, our building has played host to a litany of high profile guests.  In the 1930s Mahatma Gandhi addressed the Great Hall as did Sir Winston Churchill in March 1945, just before the end of the Second World War. Later that year Clement Attlee addressed crowds outside of our building following his victory in the General Election and in January 1946 the Methodist congregation moved out for several weeks, enabling 54 nations from across the world to hold the first General Assembly of the United Nations – the UN was essentially formed in our Great Hall.  During the inaugural meeting of the UN, Eleanor Roosevelt spoke in the Great Hall.  In more recent times many political and religious leaders have addressed meetings in the Great Hall including the Revd Dr Martin Luther King Jr, Tony Blair and last year Archbishop Justin Welby.