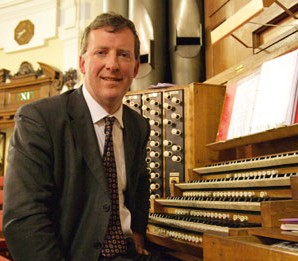 GERARD BROOKS is a concert organist and teacher of wide experience. He first studied the organ with John Webster, and was elected Organ Scholar at Lincoln College, Oxford. He then won the Stephen Arlen Memorial Award which enabled him to study with Daniel Roth in France at Strasbourg Conservatoire, where he was also active as an accompanist and tutor. He also studied with Susi Jeans and Nicolas Kynaston. He is a Fellow of the Royal College of Organists and was the first recipient of the Forsyth-Grant/Hurford Travelling Scholarship awarded by the RCO.

Gerard is Director of Music at Methodist Central Hall, Westminster, Organ Tutor at Latymer Upper School and a tutor with the RCO/St. Giles Organ School. He has become particularly associated with French repertoire and has contributed many articles to musical journals as well as writing the chapter on French and Belgian organ music for the Cambridge Companion to the Organ. His recordings on the Priory label have all been broadcast on national radio and include the complete works of Eugène Gigout played on historic organs in France on five CDs, the first of which was voted an Editor’s Choice in Gramophone magazine. He has also recently recorded the complete organ music of Saint-Saëns and is the presenter and one of the featured organists on the Fugue State Films DVD “The Genius of Cavaillé-Coll” which won the BBC Music Magazine Award for Best Documentary in 2014.

Gerard is a regular tutor on RSCM and RCO courses and has also taught for the London Organ Day, Oundle for Organists and the Edinburgh Organ Academy. He is the founding Director of the London Organ Improvisation Course and is on the examination panel of the Royal College of Organists. Concerts in recent years have taken him to England, Scotland, France, Germany, Italy, Canada, and the USA.